Should politicians have a thick skin when people abuse them online? Not the President of Ecuador – he’s responded with hard line tactics.

People in the public eye often get “trolled” online, subjected to personal or rude attacks. During his latest weekly presidential TV address, Ecuador’s President Rafael Correa seemed to have decided enough was enough. He used the speech to name and shame people who had written abusive comments about him on Twitter and Facebook.

“Let’s have a look at the sarcasm that one has to contend with, that my children and relatives have to see,”the president said during his three-hour address. He read out some of the messages, which included rude language and even a death threat (“a bullet on your head wouldn’t suit you bad,” one Twitter user had written).

But he went much further than simply naming the accounts. Most of the people trolling him hadn’t put much personal information online, but the president revealed three people’s full names, ages and addresses. He also asked his supporters to send thousands of tweets to each of them. “For each tweet they’ll send, we’ll reply with 10,000,” the leader warned.

In fact Correa’s troll army failed to materialise. The three users he singled out had some abuse hurled their way, but the messages didn’t number in the thousands, and many people tweeted support for the president’s critics. BBC Trending spoke to one of those named, a man in his thirties, who laughed the incident off after last weekend’s address. But he’s since deleted all of his tweets and profile picture. Another of those targeted, an 18-year-old student, closed his account, and the third person named locked her account, making her tweets private.

Correa has won three consecutive general elections and is widely regarded as Ecuador’s strongest leader in decades. He describes himself as left-wing and internationally he’s known for offering asylum to Wikileaks founder Julian Assange, who remains at the Ecuadorian embassy in London.

Despite that, his critics say his actions undermine free speech. He has called private media in Ecuador his “greatest enemy”. And Reporters Without Borders has been critical of the Ecuadorian government – last year the NGO said that there was a “high number of abuses committed against journalists” in the country.

Andres Mejia Acosta, a political scientist at Kings College London, says the president’s outing of ordinary Twitter users fits into a familiar pattern. “This is one example of a systematic series of attacks against different members of the public or the press who criticise him,” Acosta said. 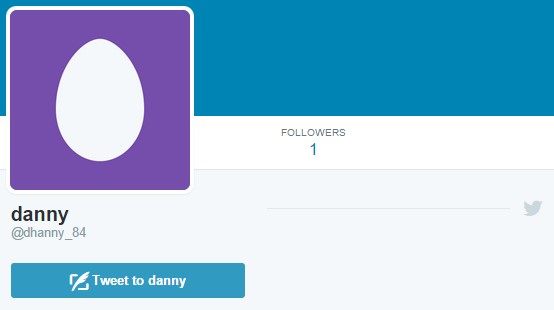 In addition to the three Twitter users, Correa attacked the person behind the satirical Facebook page Crudo Ecuador which posts pictures and memes sending up the government. The page had around 200,000 followers – but that number shot up after the president’s speech.

Correa said authorities hadn’t been able to identify the person behind the page, but he asked his supporters for help in outing him. “Let’s see if when we find out who this person is … he’ll be so funny,” the president said. Correa criticised his critics for remaining anonymous and vowed to reveal more personal details about them. “Anonymity is for cowards,” the president said. “Brave people say the same things, but face to face.”

BBC Trending tracked down the person behind Crudo Ecuador – who wanted to remain anonymous for fear of reprisals. But they told us that they were worried about the president’s campaign. “I never expected Crudo Ecuador would get to the point that I’m probably one of the most wanted by the Ecuadorian government,” they said. “The president has a TV programme – financed with my taxes – and he is using it to discredit me just because I’m giving an opinion.” 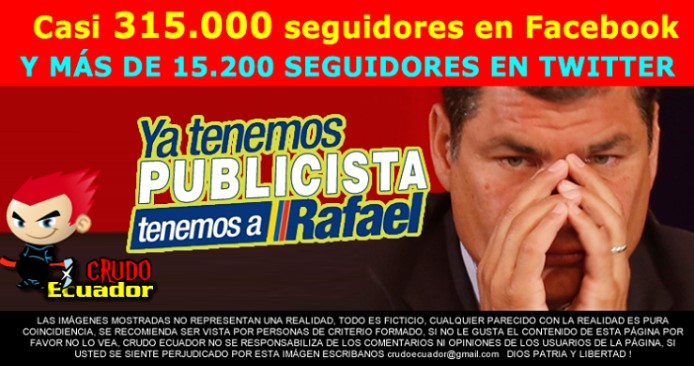 Crudo Ecuador’s mocking response to Correa’s speech: “Nearly 315,000 followers on FB and over 15.2k on Twitter. We have an advertising agent, we have Rafael.”

Farith Simon, a legal expert at San Francisco University of Quito, said that making threats against a politician is against the law, but that the president’s address is also problematic. “It’s illegal to name and shame those who wrote [these messages] as it raises issues of privacy and incitement to violence,” he said. BBC Trending asked President Correa’s office for comment, but we’re still waiting for an answer – we’ll update if we get one. 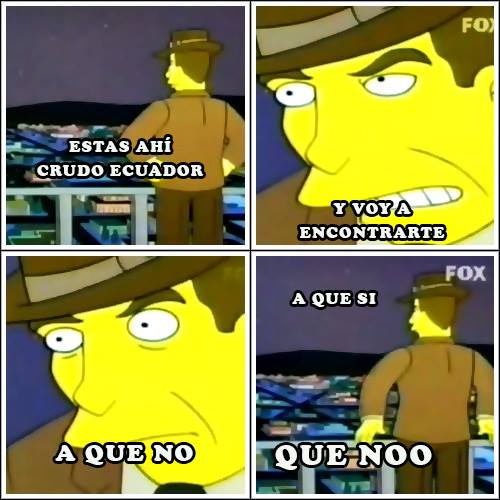 One of the satirical messages being passed around on social media after the president’s address. Translation: “I know you are there, Crudo Ecuador / And I’m going to find you / No you won’t / Yes I will / No you won’t”